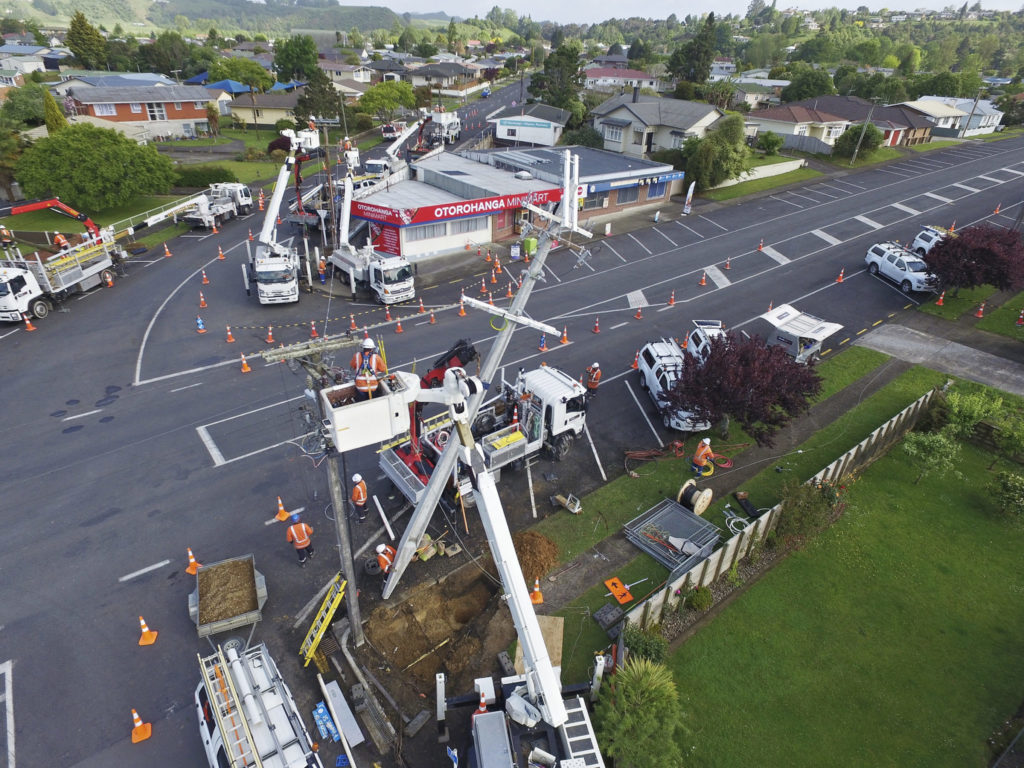 A bird's eye view of line mechanics working at the corner of Turongo and Hinewai Streets, Ōtorohanga

On Sunday around 80 line mechanics worked on Ōtorohanga’s power lines in the biggest urban project carried out by local electricity distributor The Lines Company (TLC), in some 30 years.

Power was switched off to most of the town’s centre for the combined 80-strong TLC and contractor Northpower team to remove and replace power poles and cross-arms.

A fleet of 12 lines trucks and other specialist heavy equipment was used in the upgrade work which included some 60-year-old poles. Crews worked throughout the day to minimise disruption and ensure power was back on by 5.30pm.

“This is a significant project that’s been more than a year in the planning, includes more than 250 individual sections of work, around 55 scheduled outages for the town and by the end of it, will have been some 9400 ‘man’ hours of work,” says general manager of network, Mike Fox.

“None of this could have been done without the consistently great support we’ve had from our Ōtorohanga customers. It’s been brilliant and a huge thanks from us for that. We’re confident the upgraded lines and greater supply they’ll have from our Te Waireka work is going to be good for the town and its future development.”

The CBD work supports TLC’s $1.2 million line upgrade in the Ōtorohanga area and follows several months of line work in the more residential northern and western parts of town that began in June of this year.

All Ōtorohanga’s line renewal work was expected to be completed in November, however, some sections impacted by bad weather are being rescheduled into the coming months. Rescheduled work will be notified in the usual way.